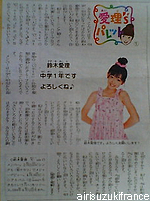 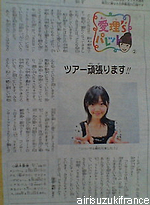 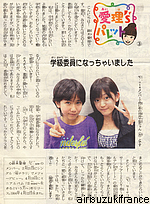 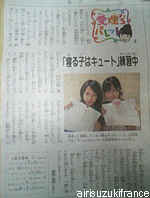 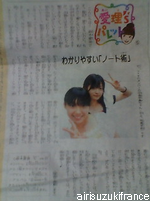 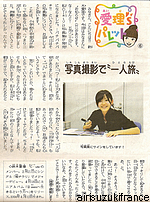 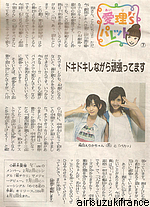 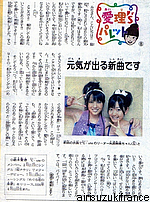 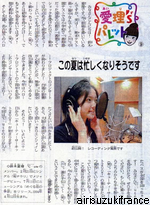 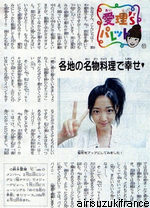 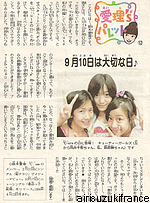 05.10.2007 - "Climate change"
(No preview)
19.10.2007 - "This tour's new challenges"
(No preview)
Translation (by Airi Suzuki Online):
Hi everyone! It's Airi Suzuki. It's pretty cold lately~ It's the period to change our school uniform. Short-sleeved shirts to long-sleeved ones, our skirts' material is thicker, we're wearing jackets. A lot of changes! It's like a renewal. I'll do my best to fight the cold!!
Changing the topic, but °C-ute 's Autumn tour is ending on October 28 in Sapporo. During this tour, I'm facing a new challenge. It's a really big step for me! I'm doing a solo MC. I'm... very bad at telling something I learnt by heart... I was surprised when I was told "You're going to have a solo MC!". I hope to do it properly! It's a great occasion to get better at some things I'm not used to do.
I thought a lot about the way I should talk, I'll do my best (laughs) It'll be a very good experience!
Another announcement. Buono!'s first single will release on October 31. It's a really dynamic song. I think the title "Hontou no Jibun" tells you so... Please listen to it~!
See you soon, bye bye... 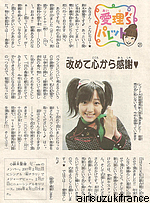 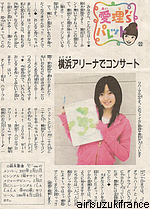 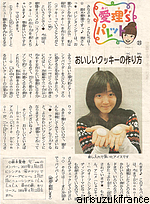 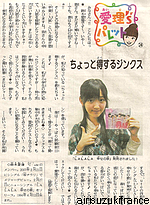 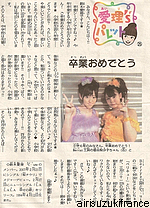 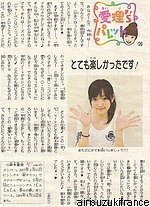