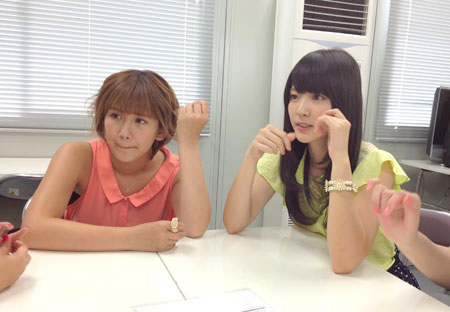 ——If you had one request to your producer, Tsunku♂?
Suzuki : As Tsunku♂ thinks of and write every single lyrics of our songs, I think he has an amazing understanding of a woman's mind. I'd like to produce a song which would reflect our own feelings... It's something I'd like to do.

——Like a love song?
Suzuki : Members are a bit The members remain a bit illusory concerning love. I think we won't be able to write lyrics about that (laughs).

——Would you like to write this song with Tsunku♂?
Suzuki : This time, to show our feelings concerning our first Budokan performance, Tsunku♂ wrote a song for our new album "Tadoritsuita Onna Senshi". He wrote our passion to work towards this goal which was Budokan. But I believe there is a part of °C-ute that Tsunku♂ might not know. This is why it may be good for him to listen to a song revealing our feelings .

——You'll finally stand on the stage of Budokan
Suzuki : We always thought September 10 would be the perfect timing for us to produce at Budokan. It's now officially "°C-ute's day" and we're really happy. It's a day fans can reunite.

——September 10 almost became Morning Musume.'s 9ki et 10ki's day.
Suzuki : Actually it was a joke... I was reassured it wasn't taken from us (laughs)

——What will it become on stage?
Suzuki : I seriously can't imagine how we'll feel on the Budokan stage. I will remain myself from crying... I think I want to sing perfectly, but I won't be able to not cry (laughs)