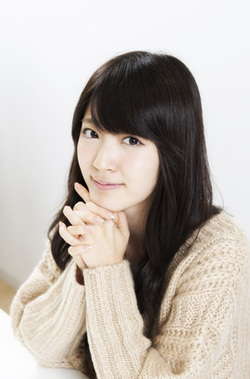 ――What manga did you read as a child?
Suzuki : When I was in elementary school, although I read "Nakayoshi", I was more addicted to "Atashinchi"! During my 6th grade, I read the manga version of "Project X" available at the school library. Since it talked about things like the construction of the Tokyo Tower, it was an interesting manga.

――It's pretty cool (laughs).
Suzuki : I was reading "Gakuen Alice" that ℃-ute member, Nakajima Saki, had advised me on during my college years. It was a pretty cute manga, and found the script of the manga, "a school of all people with magic (an "Alice")" interesting. I'm addicted to manga's that present a vision of the world that I couldn't experience in reality.

――Have you ever read shônen (note: manga for boys)?
Suzuki : The one I remember most was advised to me by the other members, "Uruyasu" (Urayasu Tekkin Kazoku). People like Antonio Inoki are modeled there. Even if the drawings are not cute, it's easy to read and understand, you can read it in one go. As until now I was only reading romantic manga and schoolgirls stories, it opened my eyes. "Funny manga can be interesting too!" (laughs).

――Which manga are you addicted to lately?
Suzuki : "Kanojyo wa Uso wo Aishisugiteru". I read it as it comes out. Since I really love to sing, it is a pleasure for me to read it. And it reflects the world of entertainment in an amusing way. I am also looking forward to the movie, scheduled for December.

――Last year you met the mangaka Mizuto Aqua for work.
(Note : For Hello! Channel vol.10)
Suzuki : Yes, it was a pleasure to work with her, she was very friendly. Even though I'm used to drawing my character "Su-san.", she gave me a lot of advice about the tones I should use to make the character more beautiful. And she gave me a pen and ink as a gift, but I would like to keep them forever. I don't really know how to use them... (laughs)

――Have you read Mizuto Aqua's latest manga, "D' Princess", released this month?
Suzuki : Of course! It takes place in a special school, a bit like "Gakuen Alice". There are children with dragon blood, a fairy family, this mix of students is fun.

――Were there any impressive scenes?
Suzuki : [...] I also like the stove Mrs. Honda. I love Chinese food. I used to write "My favorite dish is Chinjao Rosu" on my presentations in elementary school (laughs). I would like to eat the "3 meat fritters" they talk about in the manga.