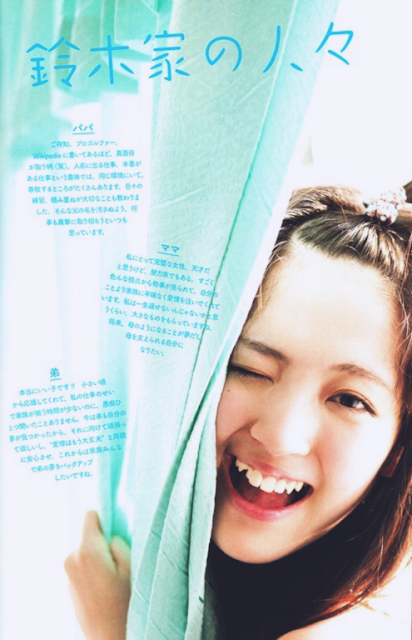 Papa
As you know, he's a pro golfer. His greatest strenght is his seriousness, so much that it's written on Wikipedia (laughs) We share the same environment as we both have work where we appear in front of people, perform in front of others, so there are a lot of part of him I admire. He also taught me that day-to-day practice and efforts was important. I intend to continue to work hard, not to harm his reputation.

Mama
She's a perfect woman to me. I believe she's a genius, but she's also a hardworker. She's looking at things from a lot of points of views and she gives an unconditionnal love to her family, more than to herself. She gives me so much, to the point I wonder if I'll ever be able to give it back to her. My dream is to be like her in the future, and to be a person that supports her mom the best that she can.

Little brother
He's a really good child!! Supporting me since he's a small boy and even though we cannot spend much time in family because of my job, he has never complained. Right now, he's found his own dream (t/n Airi's little brother, Takayuki, also wants to become a professional golfer like his father. He's now playing golf at university and often trains with his father.) and I want him to do his best for it. From now on, I want my parents to feel "Airi is okay now" so the whole family can concentrate on supporting him.