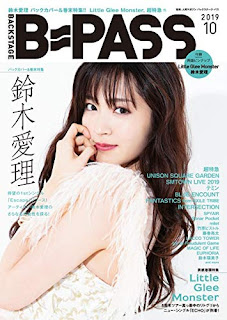 You released your first album "Do me a favor" in June 2018, and even performed at Nippon Budokan just after. We were able to see a lot of sides of "Suzuki Airi".
Right, because the theme of the album was "chameleon", so I wanted people to see my various images. And the theme of my first tour was kind of "Which Airi do you prefer ?".

So you had to pack all of these genres into one single, "Escape" ?
Well, because the impact I have to leave on people is different. My album is full of things I wanted to do, but for the single there are parts I had to be very careful about. That doesn't mean I will restrict myself with one style only from now on. On the contrary, I'd like to polish these various images one by one while showing them. "Escape" is like the first part of this.
I've started the "Escape" tour on May 25, and I feel like I've been able to enjoy my songs more than during the previous tour. Because as a solo artist, I'm involved in the tour production and concepts, so I've started thinking about this single and the tour since January.
The lead song of my album, "DISTANCE", was a very cool song and is like the image I want to convey as a solo artist. It left such a strong impression that many people were surprised I didn't pick it for my first single. The songs I've chosen for the single makes a different impact than "DISTANCE" and I wanted to show an image that is somehow bigger than "DISTANCE". Along showing my singing and dancing, I also want my solo activities to show my feminine side !


There is a flamenco approach to "Escape", and you're also singing with a variety of keys. In that way, it's musically a very rich song.
I think so too. I had training to pronounce the consonants very clearly. When I was in ℃-ute there was always somebody doing the low tones so I didn't really have to sing them by myself, but now that I'm alone I have to do it all, so it was pretty hard. I think that the old me wouldn't be able to sing it.

"IDENTITY" is also very different than "Escape". We can feel it's a song you need to be skilled to sing.
I tried to show my singing skills in "IDENTITY". I thought it as an opportunity to show my strenght, with the long tons and high notes.

"Escape" and "IDENTITY" are very different.
We did two music videos this time ! For the "Escape" video, as the title says, I'm running away ! There is a back story : the girl wearing a white dress is always escaping, followed by a girl in pants who seems like she's holding a secret, both watched on a monitor by the black jacket girl. I'm really wearing these 3 different outfits patterns and I'd be glad if you can enjoy it. "Escape" makes your heart races ! "Escaping" but not secretly running away ; doing it while provoking. That's what makes it exciting.

Are there any times in your life you wished you could've escaped ?
Ahahah. There are many (laughs) I'll talk about something very recent but, I tried to go to to Shibuya recently, from the Daikanyama station. I'm not very used to fancy cities so I checked the train schedules on an application, but the result that came out was pretty weird. In my head, it was like "You'll get to Shibuya if you take the next train", so I rushed in the coming train and ended up at Hiyoshi station...

You went to the opposite direction (laughs)
Right ! So I really panicked and hurried to get off the train, and rushed in the train coming from the opposite side of the station ! But it was not a train from the same line and it was not going to the right direction !

Okay I can imagine this (laughs) You got off the train at Hiyoshi, which is on the Toyoko line, and you took the train in front of you which is on the Namboku line, right ? (laughs)
Exactly !! When I thought "It's alright, I'll just go back from where I came" I ended up at another completely different place. I didn't even know the name of the stations. I really panicked, also I didn't have any battery left on my phone. Panic panic !! It took me 3 hours to go back to the place I was supposed to get back in 30 minutes ! I became very careful when I ride trains now. But the problem is that they leave completely different trains running on the same station.

Don't search for reasons (laughs) Just try to ride the right train !
I know (laughs) I should've searched before rushing (laughs) But that's also what I am. That's Suzuki Airi !

So, what's the "IDENTITY" Airi like ?
Good at thinking positively ! That's all thanks to my mother. When I feel really low, I just have to ask her for some advices and she immediately makes me feel better. I really respect her !

Such a great mother. By the way, what's the MV for "IDENTITY" like ?
The encounter between Suzuki Airi and animation ! It doesn't really have a strong story line, but there are illustrations that support people working hard, and we wanted the people watching to feel a lot of kind of emotions.

This time, there are different songs included in the versions of the single.
Yes. There is "DAYLIGHT", which has been written and composed by Ichiji Hiromasa and Mizushima Yasutaka. It really has a SPEED feel. I've been loving SPEED since my childhood and I dreamed of asking them to compose one of my song. I gave all of my instructions to Ichiji-san and he gave me many advices and we created this song. I added a fake during the outro and Ichiji-san told me "I'd really like to use it so sing it during the real recording too" ! We really had many talks about this song and it really felt like a collaboration. I'm really happy.

You already performed one of the other song, "THE BRAND NEW LOOK", during your "PARALLEL DATE" tour.
Yes, for the opening ! Because the theme was a date with me, I sang it to express the exciting feeling before the meeting. I recorded it almost one year ago. I'd like this song to be the background music of your every day life. Because the music and the lyrics are really packed, I think you'd get another view on the song by listening to it while reading the lyrics card included in the single ! It's a song that really express the exciting feeling of a girl, so you boys really have to pay attention !

And then there's "Watashi no Migigawa (Sound Inn "S" Version)".
I created "Watashi no Migigawa" with Yamazaki Aoi-chan, and also created the music video by myself. This version is the one that was arranged during BS-TBS' "Sound Inn "S"" program. It gives an album feel even though it's on my single. It's a song I also performed during my tour, but I'd be glad if you can listen to the recorded version too !