Suzuki Airi FC Event 2020 ～Minna no Ohanashi kikikasete！Watashi、utaimasu！～ was announced on December 5, 2019 on M-Line Club's official website. The announcement stated Airi wants to convey her love to fans for this particular date.

- Before the event, a form was sent to fanclub members participating so they could write the song they wanted Airi to perform, along a personal episode or story. Airi would read the story on the day of the event, then perform the song a cappella.
During the event, Airi randomly picked a paper out of a box, then would read the story written on it, as well as the song request. She would call the fan who sent this request to come up front, and would ask that person which part of the song they'd like Airi to sing.

- Airi announced the title of her solo live in Yokohama Arena, as well as her 2020 birthday event during this event.

- After the events, fans got special postcards : 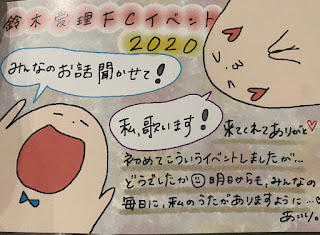 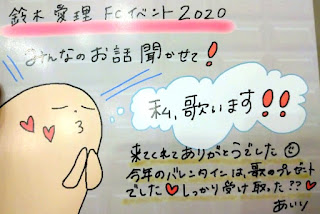