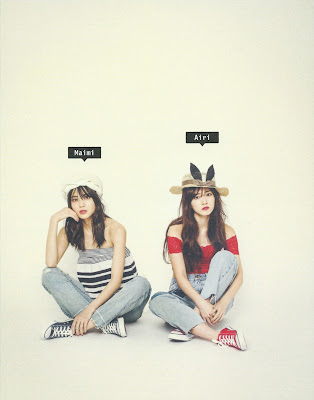 Airi : We've been together for 15 years already, but did we ever fight ?

Maimi : Not at all ! You're full of things I need to praise so there's no reason for me to get angry about you. You're a curious, hard-working person. Even if you do have complexes, you always correct them. For singing, even if there's a note that's hard for you to reach, you always end up doing it perfectly during our lives...
Airi : Stop it (laughs) You're always so good at finding good traits in others. I always thought it was your best quality. I think people must believe you're an airhead, but my image of you is someone who hates losing and who never show us when she's preoccupied by something.
Maimi : Really ? You really think of me this way ?
Airi : Yes. Like, you deliberately chose not to show it publicly. I've never told you this, but to me, the "Yajima Maimi" you are now is as perfect as you could've been. You're an Idol since 15 years and you even became Hello! Project's leader.
Maimi : But I'm always counting on you (laughs) I always come to you when I have trouble singing, like "How can I make this sound that way ?" and such. And if I do it as you advised me, I always succeed to get this particular note out of my throat. You give me advices not only about the techniques, but with your positive thoughts like "You always need to think 'I'm capable of it !' while doing it !".
Airi : That's all only because you believe in me. You're really pure and honest (laughs)
Maimi : I'm the youngest in my family, that's maybe why I'm the type of person to always listen to others' opinion. To believe that this young girl would be asked to become the leader of a group during her junior high school years...
Airi : At first, I really thought you weren't suited to be a leader and that it would be hard for you.
Maimi : As I was a child, I didn't really realize I was the leader. After few years have passed, I understood the important of this role and really felt anxious, thinking "Why me ?".
Airi : That's because you became our leader that °C-ute is now the way it is. There are many kind of leaders, but it's because it was you that our group feels like home now.
Maimi : It took a lot of time for me to get it right though. Like when I had to scold you as the leader, and, as I had to force myself once for good, I scold you for all the problems at once. You rebelled against me like "Maimi-chan, you're always so harsh when you scold us !".
Airi : That was Hagi-chan or Chisato, right ? (laughs) If you didn't do it, you'd get scolded yourself, so it was necessary. It was hard for a child to get other childs to work hard.
Maimi : I should've asked other people for advices, but I'm not good at asking. There's a time you sent me a new year card with "If you ever feel sad, know that you're not alone" written on it.
Airi : Because you never showed us your weak side !
Maimi : There was a time when it felt really hard and I asked the staff, but they've told me "You shouldn't think about it too much". It helped me a lot.
Airi : You became a baby again after reaching your twenties. I don't know if you were relieved of the burden of having to be more mature than everyone else, but you started to become more bubbly. I think that's when your true self came out.
Maimi : As for you, there was a painful time when everyone envied your position. As a kid, it's seen as getting a preferential treatment so I thought it must've been hard for you.
Airi : You wrote me a lot of letters. Even though phone messages were getting popular, we would always write letters to each others, even some 3 words memos but it would've made us think "She thought of me !". It was written like short poems (laughs)
Maimi : Short poems that had an heavy meaning (laughs) I really believed "If I'm not here to protect Airi-chan, °C-ute's over".
Airi : It's always you who kept the balance between members. You're always acting like a wild boar pushing straight forward (laughs) But you're a very thoughtful person who always cares about others.
Maimi : I hate when the overall balance is broken because one members feels bad. I can't ignore the situation.
Airi : You're like Anpanman. Yajipanman ! Maimi-chan's always right. There must be people out there who noticed they were on the wrong path by looking at how radiant she was. She always have this unbreakable strenght. So I believe she'll become a good mother !
Maimi : (laughs) To speak seriously, I'm really looking forward as to what you'll become in the future. You have so much potential !
Airi : And I'm thinking the same about you !