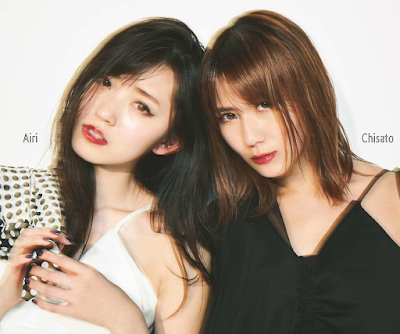 Chisato : It's embarrassing to come to a place you're always working at !
(t/n : Before getting into the "Airimania" book, this series with °C-ute members has been published in Ray magazine, for which Airi's an exclusive model).

Airi : You must feel like I do when I show up in a variety program you're used to and you have to guide me !

Chisato : I'm always working to try to beat you at singing or dancing, but there's no way I can win in such environment ! You have a good figure, and even though we've been together for so long, there are many times you make me think "She's cute...".

Airi : Stop it ! You're definitely lying !

Chisato : No, that's true ! There are times I'm like "How can her eyes be so big ?!". You must learn a lot, being a Ray model. I was so stressed during our shoot, thinking "There's no way I can win today !". It was so fun though.

Airi : This time, the concept of the shoot is different for each members I'm paired with. You like this type of cool fashion right ? Wait a minute, you came here feeling "I'll win today !!" ? (laughs)

Chisato : I didn't think I could win, I just wanted to feel like I could ! I thought I should do my best for this one person in the Ray readers who'll think "she looks cooler than Airi".

Airi : You're also my rival for singing. Your singing voice is my biggest stimulus.

Chisato : In the past, there's no way we would've called each other "rival" out loud, right ?

Airi : We never really spoke just the two of us. But even though we didn't have much contact, we were like two adolescents aware of the other (laughs) In a good way, we are complete opposites and we possess what the other don't have, like some elements and ways of thinking that we can't get even if we try hard... We're able to compliment each other right now, but it used to be very tense between us.

Chisato : We're the same age, we often got compared so we ended up comparing ourselves too. But if we had to count, I was the one coming at Airi (laughs) Airi's the type of person who won't say things out loud, but I'm pretty frank and hit back with "Yeah, but !". That's another point which differentiate us.

Airi : I remember a day where you wanted to talk about me but instead indirectly said "I hate people with B blood type !".

Chisato : I remember ! (laughs) They were many staff members with B blood type and Tsunku-san's also a B blood type so I got scolded like "Would you say the same thing to him ?!".

Airi : It was pretty fun. It's pretty rare now.

Chisato : Of course, but now that I think of it, there are so many B blood types around me. So that got me thinking I can get along with them pretty well (laughs)

Airi : That's why I'm really hyper about our post-disband. Even if there's no °C-ute anymore, it seems we can hit it off in a different way. Because as long as there's °C-ute, we'll always be rivals.

Chisato : That's right. I really think that I wouldn't try that hard if you weren't there, you know. I'm appearing on variety programs, Airi's also doing her best for modeling with Ray. If I would have been the only one doing other works besides °C-ute, I think I would become full of myself.
To me, you're the type of person who can do anything. You're having worries about your modeling job yet you're doing your best. By doing so, you make me think I should work even harder. As I never know which next move you'll surprise me with, I can never let my guard down.

Chisato : When I appear on variety programs with you, I have to improve my skills so I can follow you properly. Also, even though you're a really shy person, you can hide it well like it's not the case at all.

Airi : What ! It's the first time somebody tells me. You noticed it ? All the people around me always tells me "You're not a shy person", and as I don't want to deny it I'm like "That's right !". My mother also told me "Stop acting like you're not shy". I think only you and my mother noticed that I was hiding it.

Chisato : The fact you can play it off is amazing.

Airi : In fact, I'm smiling even more in front of people I meet for the first time or people I don't really like. Chisato, you always come to lift me up when I hit rock bottom, and you're also at good noticing things nobody did before. There are also many times when I get scolded and I feel down and when I get back in the dressing room, you're waiting for me. This unclear behavior of you might make me cry. (t/n in short, Chisato's a tsundere).

Chisato : That's because I'm always watching over you ! We've been together for a longer time than we've been with our family.